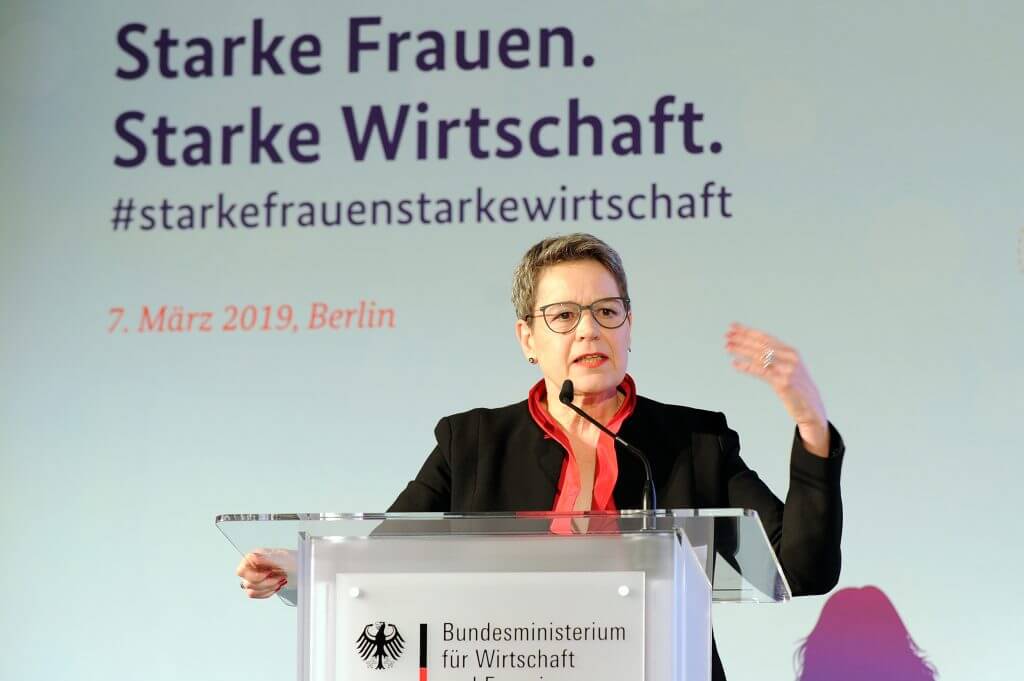 Here is a translation of the impulse lecture, which I gave during a discussion meeting on the eve of International Women’s Day at the Federal Ministry for Economic Affairs and Energy:

Todays “#Strong women Strong Economy” – it has a nice ring to it, doesn’t it?

And we know that diversified management boards and companies produce better results. Further, it goes without saying that companies whose boards can offer and debate different perspectives are more innovative. The German economy is in need of all of these things.

And yet nothing is happening.

Germany seems to be struck by a paralysis, due to its reluctance to give up its ‘tried and tested’ ways. These include the well-established processes that made Germany successful in the past. But they also include other things, such as old social systems and male-dominated power structures in virtually all contexts.

Some efforts have been made: there are now quotas – though they only apply to the supervisory boards of companies beyond a certain size.

At the same time, however, it is deemed perfectly acceptable for companies to set a target number of zero female managerial board members, and for boards who otherwise proudly rise to all challenges to claim that there are no suitable women for the job, and therefore the goal can’t be achieved.  Just as they did in the past with regard to supervisory board positions for women.

And this is happening, mind you, throughout society, and is accepted by society as a whole, by customers, by investors, and by politicians. Imagine if we applied the same attitude to environmental protection or child labour in the supply chain. Regarding gender, the old social rules are still working. In business, there is a saying: “Culture eats strategy for breakfast.”

You, Mr. Altmaier, most likely didn’t even notice it, but when you arrived, you passed the entire line of your female guests to shake hands with the first man you saw. In your speech, you addressed two guests directly, both of them men in a forum that mostly consists of women.

You didn’t notice, but the women did. That, too, is part of the old culture.

In order to change that stagnated culture, we need to make a clean break and radically reassess the rules for a successful economy.

Minister Altmaier, you asked for a provocation:

Trying to maintain prosperity with old structures, old corporate models and old systems can, in disruptive times, lead us to lose that prosperity. That’s not the solution. Fear of losing, be it power or prosperity, is not a good motivation.

In my view, what is called for is the courage to open up new industries using new systems.

We need bold new systems, and that would mean to move away from spouse splitting, maternal pensions, and the German “oven allowance” (a care allowance for families who don’t use public daycare, to help them raise their two- or three-year-old children), towards modern social systems that promote the participation of women in the working world and the participation of men in the family – because our society urgently needs both.

In addition, we need education and childcare systems that are reliable and provide everyone with the good basic conditions that a democracy, but also an economy, needs in order to be equipped for a rapidly developing future with new technologies.

These are the rules that will make the German economy strong, because strong men and strong women will be able to play.