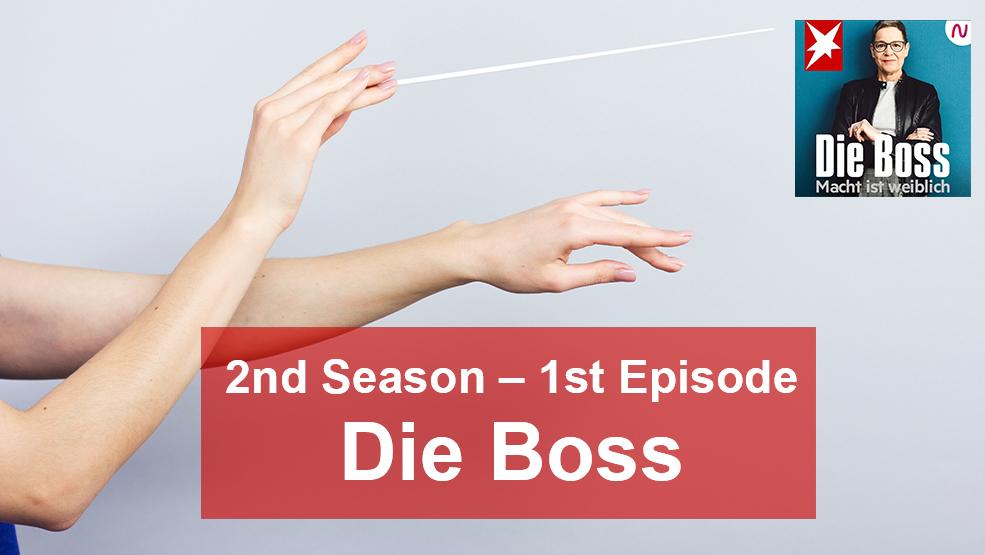 The second season of my podcast “Die Boss” has started. It was amazing to me to read the feedback of so many women who felt inspired by the stories told in the first season. I am also curious to find out what the next episodes will bring, especially since there have already been a lot of “firsts” in this second season: For the first episode in 2021, I invited my first non-German guest, who happens to also be the first female conductor I learned about. Simone Young, my guest for this episode, is a world-renowned conductor with an impressive career: When she started conducting, some orchestras did not even have any female musicians. Over the course of several decades, she conducted at famous operas like the Vienna State Opera and the Metropolitan Opera in New York. In 2022, she is set to become head conductor of the Sydney Symphony Orchestra. From her hotel in Sydney, she took the time to talk to me about music, her career, and her struggles with always being the first.

As one of the few women to have achieved this position, Simone Young has some unique insights into how much has changed in orchestras, a traditionally male-dominated world, over the course of the past decades. She recalls how 50 years ago, even having a female play the first violin was considered almost unthinkable. Now, some orchestras hold their auditions behind curtains to ensure that skill, not gender, is the decisive factor. Simone Young is convinced that the time for more female conductors and composers has come, too.

For Simone Young, growing up and starting her career in Australia made a world of difference: In Australia, her gender hardly mattered – but when she came to Germany to conduct, she was surprised and annoyed to always be labeled the “first”. And if she hadn’t started her career in Australia, her life might have looked very different today: After all, she never studied conducting, never had to pass any entry tests where she might have been discriminated against. At 24, she was already conducting at the opera in Sydney – while her peers in Germany were still attending a music conservatory.

It was also in Australia that Simone Young met her husband. I know from reading your feedback that a lot of my listeners have been wondering: How do you balance a career like that with having a family? In that regard, Simone Young believes, she has been lucky: When the time came to move to Hamburg, her husband’s job enabled him to move there with her. Still, balancing her career and family meant not getting a lot of sleep and having to miss important dates. Her advice for couples in these situations: prioritize – and learn to like spending time by yourself.

I have always been enthusiastic about art and music, so talking to Simone Young and witnessing her passion for music was a very special opportunity for me. I learned a lot from our talk: from her experiences as a synesthete (hearing music in color) to the question of why conducting baroque music feels like wearing the wrong glasses to her – all these impressions are sure to change the way I look at both the orchestra and the conductor at my next concert.

If you haven’t listened to the episode already, you can find it on all major podcast distribution platforms, as well as on the Stern website. And, as usual, I am looking forward to exchanging ideas and thoughts on the recent episode with you here on my website or via LinkedIn. In which situations have you been the “first”?

15th Transatlantic Business Conference
03.12.2021 at 9 am:
Shaping the Future of Transatlantic Economic Relations after the German General Elections